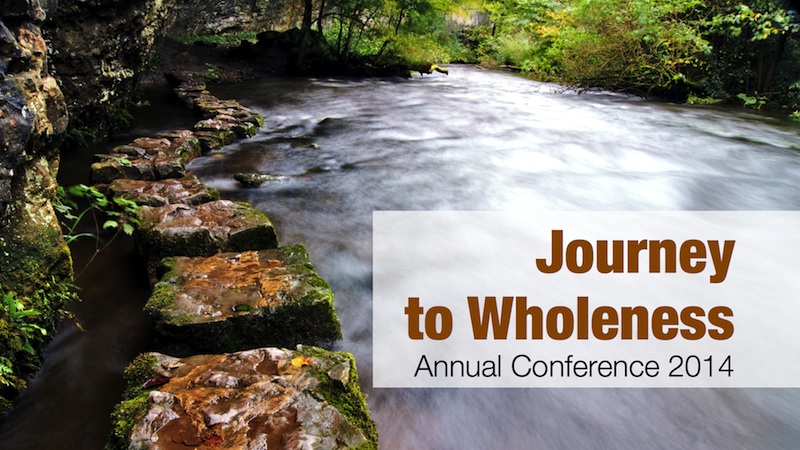 Opening worship on Wednesday, June 18, 2014, ushered in the Spirit of God to warm the hearts of almost 1,500 gathered, and others via livestream, as Resident Bishop Minerva G. Carcaño called to order the 30th Annual Session of the California-Pacific Conference of The United Methodist Church. With the theme of, “Journey to Wholeness,” (#onthejourney) the 30th Annual Session specially recognized the Imagine No Malaria initiative. The California-Pacific Conference goal is 300,000+ lives saved in Sub-Saharan Africa by donations of $100 per attending member by the end of 2015.

Bishop Thomas Bickerton, Resident Bishop of the Western Pennsylvania Conference and Chairperson of the United Methodist Global Health Initiative, proclaimed in the opening worship sermon that The United Methodist Church should be proud of the fact that $61 million has been raised up-to-date of the $75 million Imagine No Malaria goal, cutting the malaria child mortality rate in half in Sub-Saharan Africa since beginning the effort, and that The United Methodist Church was the sole religious organization represented at the 2013 Global Fund Replenishment Conference in Washington D.C.

While Imagine No Malaria was the main emphasis of Annual Conference, DisAbility Ministry was also highlighted as an important part of the journey to wholeness of inclusion of all into the life of the church. The DisAbility Ministries Task Force of the Cal-Pac Justice and Compassion Essential Ministry Team, shared with the Session a moving presentation on the challenges, blessings, and joys of being a person with a DisAbility as well as being in ministry with those who are DisAbled. Resounding applause followed the presentation and multiple requests for a video recording of the presentation were made. A video is currently in production and will soon be made available.

This past year was a year of discerning a vision for the California-Pacific Conference. After over 1,200 people participating in nine district vision discernment events, some 13,000 responses from church members on vision, and many days of work by the Mission/Vision Discernment, Assessment, and Articulation sub-committees of the Cal-Pac Navigation Essential Ministry Team along with the support of a consultant and staff members of The Upper Room, the new vision statement for the California-Pacific Conference was presented and accepted as: “Inspiring the world as passionate followers of Jesus Christ so all may experience God’s life-giving love.”

The next phase of the visioning process will be to create and implement a strategic plan that brings the vision statement to life and carries forward the areas greatly represented in the responses of the visioning process of service, social justice, inclusion and outreach. The effort would also support the progress made by the Cal-Pac Strategic Financial Planning Task Force, called by Bishop Carcaño and comprised of representative of a number of different committees throughout the Conference, in leading the Conference from deficit to abundance. The Task Force reported much improvement in the fiscal operation of the conference this year and that the priorities going forward would be in the areas of retired clergy healthcare costs, delinquencies of local churches to the Conference, and the improvement of Conference communications.

The Council on Financial Resources of the Cal-Pac Resource Essential Ministry Team reported good news to the Conference in that the 2015 budget would, in planned total income and expenses, be the same as the 2014 budget. The most significant change was in the increase of the New Ministries Essential Ministries Team budget in emphasizing the Conference’s new start and revitalization efforts, evidence that Conference finances are appropriately being utilized to support the vital ministry of the Conference.

In addition, the Board of Pensions reported that it will present a recommendation to the 2015 Annual Conference that the California-Pacific Conference begin on Jaunary 1, 2016 to provide a subsidy based reimbursements for retired clergy health insurance as well as moving into a healthcare exchange system. After much studying and consideration, the Board found that most retired clergy in other Annual Conferences were able to find healthcare at lower costs with the exchange program. Such a recommendation is an effort on the part of the Board of Pensions to seek the best healthcare possible while keeping the financial realities of the Conference in mind.

A touching encouragement of our Conference finances is in the fact that the special offerings collected throughout the worship services were in the amount of almost $80,000 for Imagine No Malaria, $2,000 for the Ministerial Education Fund, and $3,000 for the Strength for the Journey Ministries. Such giving is a display of not only the generosity of the California-Pacific Conference, but also its global outlook and its desire to see the life-giving love of God be warmly present in the lives of all people.

In a display of great diversity of thought and spirit of unity which best characterizes the California-Pacific Conference, the sponsors of Resolution 14-3 that calls for the Bishop and Cabinet to “consider a moratorium on the use of church trials as a disciplinary action for conducting same gender wedding ceremonies,” met one evening with a group of Conference members seeking an amendment to the resolution for an open-hearted and open-minded discussion and came to an agreed-upon amended resolution which was approved by the body. Such a moment was an example of how even a resolution can bring out the best in the California-Pacific Conference. As well, the same could be said for the General and Jurisdictional Conference elections as a total eight General Conference and 14 Jurisdictional Conference delegates were elected, out of which a majority were women and persons of an ethnic minority.

In the midst of resolutions and elections is also a time set aside in Annual Conference to celebrate the lives of our clergypersons who were called into glory this past year as well as to determine the future of some of our local churches whose vitality of the past has not been the reality of the present. Rev. Dr. Sharon Rhodes-Wickett led the Session into comforting reflection through the sermon delivered in the Memorial Service, saying that, “All who have gone before us count on us to pick up the mantle just as we count on those who come after us. It is God’s larger journey of wholeness of which we are a part; an unfolding hope and promise.” 18 clergypersons and 15 clergy spouses were remembered for their faithful service and unending passion for ministry and life. And, four local churches, Paramount United Methodist Church, Pico Rivera United Methodist Church, South Pasadena United Methodist Church, and Whittier Trinity United Methodist Church were discontinued by the vote of the Conference.

The celebration at Annual Conference continued into great expectations of the present and future. In the Laity Address, Conference Co-Lay Leaders Phil and Connee Freeman, as well as other leaders of the Laity Council, honored the 2014 Lay Persons of the Year: Jan Windhausen of Emmanuel UMC of San Bernardino and Rick Wilson of Northridge UMC. Both were recognized for their long-time exemplary service in the church, bringing their local church along on the journey to wholeness.

Hundreds of young people and supporters of young people’s ministry gathered for the Young People’s Connect Worship Service where Rev. Royce Porter offered the idea of not only remembering the “Three ‘R’s of Reading, Writing and Arithmetic,” but also the “Three ‘R’s of Resilience, Reward, and Relationships.” Afterwards, those present were encouraged to participate in the prayer stations around the worship space so as to commit to a life of following God’s plan.

As well, eight persons were either commissioned or entered into full connection with the Annual Conference as well as the consecration of one Deaconess. Bishop Minerva G. Carcaño, preaching in the Ordination Service, reminded the Session and the ordinands that we must stand with Jesus on the journey to wholeness, steadfastly facing its challenges and resisting the urge to cling to religious rules that offer a false sense of security from anxiety. “Rules do not regulate the heart of God, and we are fortunate that this is the case because where would you and I be if it were not for God’s grace,” Bishop Carcaño proclaimed.

Such is the attitude and spirit by which the California-Pacific Annual Conference of The United Methodist Church is led and which will inspire the world as the people of God live as passionate followers of Jesus Christ so all may experience God’s life-giving love for another year until Annual Conference 2015.