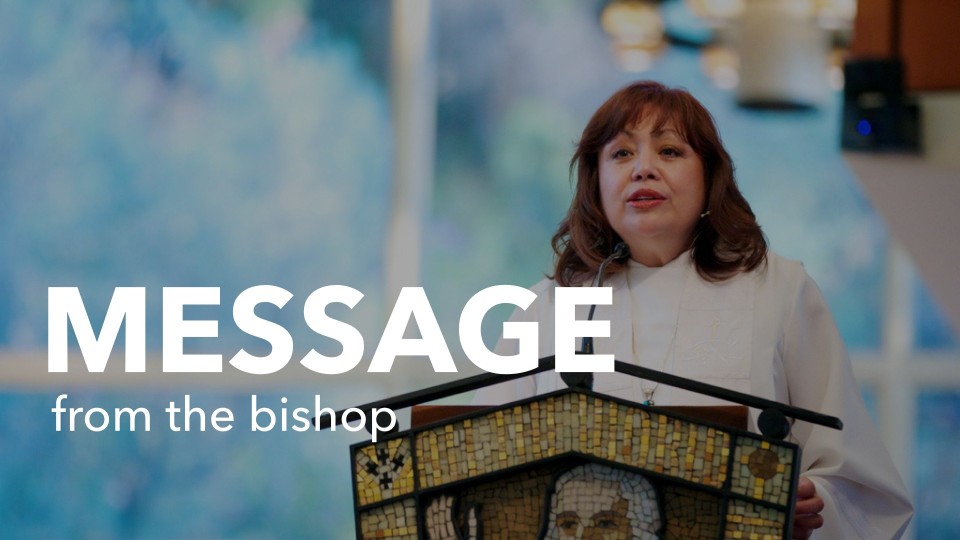 Nothing grieves my soul more than to see a child on the immigrant journey. That the child Jesus was forced onto that cruel and inhumane immigrant journey, I know grieves all of our hearts. But as Joseph and Mary are forced to leave Bethlehem for Egypt with the child Jesus in their arms, we also receive the good news that God is active in saving Jesus for our salvation. As I encounter immigrant children today I am led to consider whether God is intervening in their behalf for our salvation in the precious name of Jesus.

I met a young couple on the border once, young and so in love, committed to making a good life for themselves. When I met them they had just been detained by the Border Patrol after spending four days in the desert with little food or water. The Border Patrol had given them crackers and water, processed them and then summarily dumped them on the Mexican side of the border fence. But they were not alone. With them was their 2 year old son.

I asked them what they were going to do. Mine was a practical question. Would they go home or try to cross the border again? Did they have any money? Was there someone to help them? Where were they going?

They were headed for Florida where work awaited them but they had no money, nor anyone to help them. I looked at their beautiful child and stroked its cheek. They must have seen the worry on my face and said, “We will wait until the weather is better because the desert cold was too harsh for our little boy.” They looked at each other then turning back to me smiled and gave me not the practical answer but the faith answer: “God will be with us,” they proclaimed, “Our God has never abandoned us.”

I knew the treacherous hills and mountains just ahead for this young couple and their child. In my mind even in the darkness of night I could see them before us. But when I heard this couple’s confession of faith my heart was immediately filled with the words of the Psalmist,

I will lift up mine eyes to the hills,
from whence cometh my help?
My help cometh from the Lord,
who made heaven and earth.
Psalm 121:1-2

At that moment I ceased to be the pastor and became the recipient of the good news, ministered to by this young couple and their child as they gave incredible witness to God’s faithful goodness. My faith was renewed; the thirst of my soul for a word of saving grace quenched.

Every time I am among our immigrant brothers and sisters, they and their children confirm that God is with them and God is with us. I have come to believe that immigrant children will be the salvation of the Christian church in the United States for they have seen the wondrous presence of our Creator God in the most perilous places of their lives, experienced Jesus the Christ bearing their suffering for them, and have known without a doubt that the Holy One has and will be with them come what may. In their confession they strengthen our faith and our hope.

But should we not also consider that in God’s merciful intervention in human history God calls upon human agents to serve God’s holy purpose of salvation. Joseph and Mary were the human agents God used for God’s own purpose of protecting the life of the Christ Child. Are we not the human agents being called upon by God today to save the lives of immigrant children; children whose witness into the days to come will build the reign of God among us?

As Christians we are called to be the people of God’s justice; a justice that goes beyond human laws, certainly beyond broken and immoral laws. The Christ Child in the arms of his earthly parents faced the immoral lust for power of King Herod. King Herod was the law maker, but that did not make his laws right or just. On this night in our country we live under the rule of law made by those who have been given the power to create such laws, but they are not always just laws.

We have today a broken and immoral immigration policy in this country built upon the economics of greed and overconsumption. We in the United States are not the victims of the immigration crisis. We are as a nation among the perpetrators of policies and economic agreements that with the Christ Child force children to be carried into the wilderness in the arms of their desperate parents to avoid their death; death from poverty and hunger, exploitation and oppression.

Through Holy Scripture we have been forewarned that trouble is in the land every time someone threatens the life of a child. And you and I with Joseph and Mary are called to stand and run swiftly as agents of God’s mercy and salvation.

I pray that as Christians, Roman Catholic and United Methodist, we will stand and run swiftly united in defense of the dignity of human life remembering our immigrant brothers and sisters; with them, demanding justice, extending compassion, and proclaiming good news – the God of justice is with us. Amen and Amen.