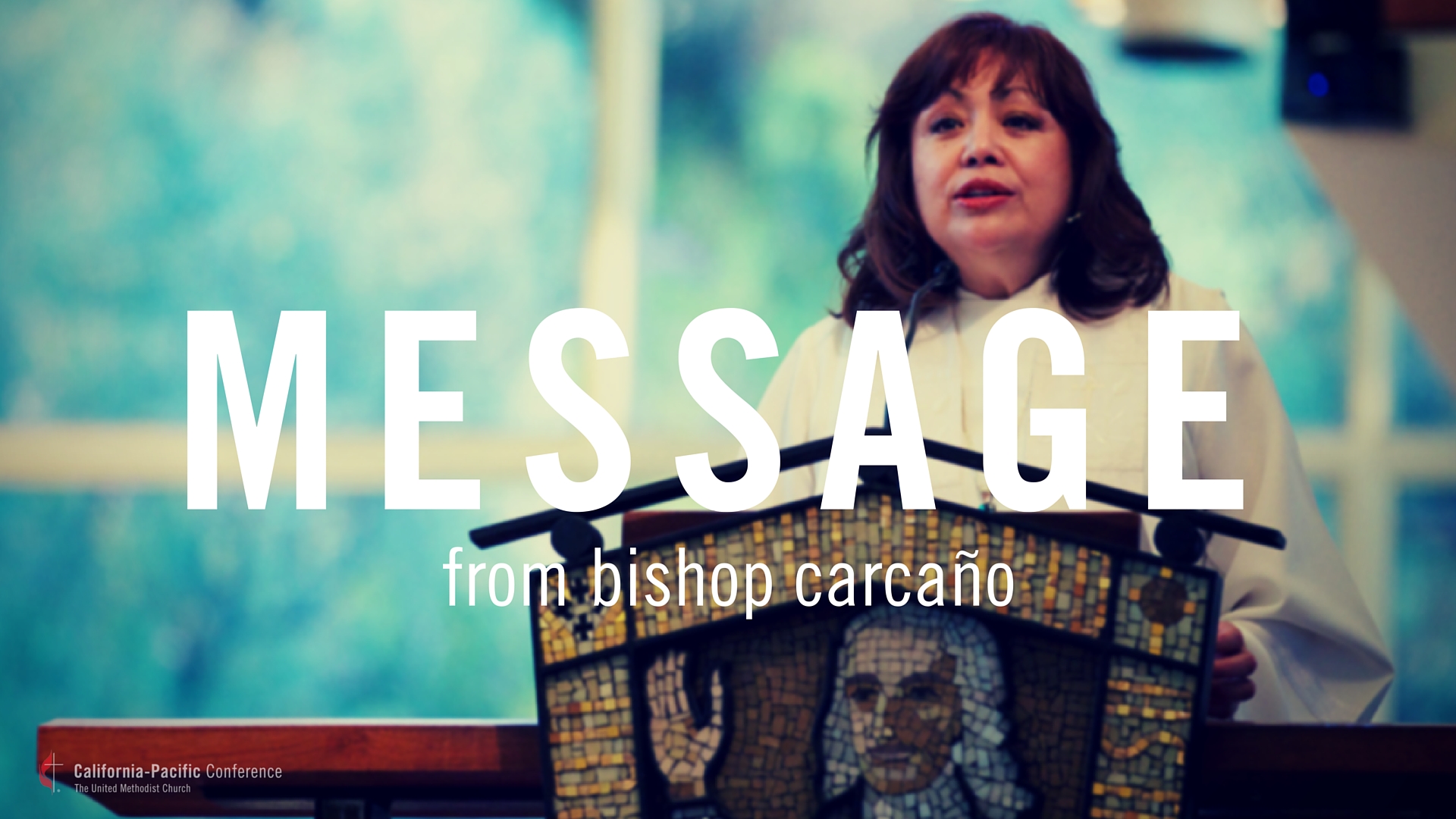 I will never forget how we started our GCORR work this quadrennium. It goes back to the 2012 General Conference and I could not believe what I was hearing and experiencing. After 40 years the commitment of The UMC through GCORR to work to overcome institutional racism in the church and in the world was being buried; buried in an undefined column on an institutional organizational chart. If one dared to ask how the functions of GCORR were to be determined and carried out in this new place on that institutional organizational chart, one was accused of not trusting the process and even worse, of being responsible for the decline of the church just by not accepting the restructuring plan at face value.

For some GCORR had become an unnecessary part of the church. Fighting racism seemed no longer an important agenda for the church. The critique was strong, dismissive, disrespectful and even attacking. I’ll always remember the woman at General Conference 2012 who stood on the floor of the conference and declared with a hostile voice and with papers shaking in her hand that all she ever received from GCORR was flashy expensive brochures that served no good purpose. It did not help that the voices of judgement were consistently White voices.

Some of us were led to wonder whether The United Methodist Church had ever truly had a commitment to the inclusion of all of God’s children with the fullness of their diversity. Had the changes over the years forthcoming from much work on overcoming our sin of institutional racism been forced, only of the mind, this is what we had to do, rather than of the heart, this is who we were called to be?

It all felt like a war zone; like Babylon had come in and conquered our minds, our hearts and our spirits and taken us away to a distant and hostile land. We were feeling the pain of Israel stuck in Babylon without a way home.

But it wasn’t just an external attack upon the ministry lodged in GCORR, it was internal as well. Several years of the assessment of the work of GCORR had led us to see how complacent we had become, and even corrupt. While the world was changing all around us, growing much more multi-ethnic with its challenges and opportunities, we were comfortable just tweaking a White church. And we had become the slaves of special interest groups rather than being the visionary eyes of the church, scoping out what next steps God was calling us to take in order to be more like the beloved community of God’s hope.
I believe it is safe to say that after 40 years of ministry, sin had set in among us like an oppressor of the worst kind because it had become both institutionalized and internalized, outward and inward.

In The United Methodist Church the oppression by the oppressed looks like this:

So children of color and poor children suffer and die in Flint because they are not considered important enough to have safe, drinkable water;

Black young men are slaughtered on the streets of this country by those who are supposed to protect them;

Immigrant children, little children from countries in Africa and the Middle East especially Syria are being washed up dead on the shores of Turkey trying to flee from war and poverty with their families;

Brown, Black and poor young people are incarcerated for reasons that make no sense in the long run…..

We do very little to seek to understand the life and culture of persons who are different from us though God has sought to reach out to us when no one else understood us.

And then we lament and cry that our church is dying, that we don’t have enough to sustain our ministries, and that we are oppressed by a world that has passed us by. But, my brothers and sisters, we cannot claim to be oppressed and then oppress others by omission or commission and think that God will listen to us. We certainly don’t get a pass because we’ve been oppressed. Sin is Sin! The lack of love and care and welcome for others and even worse, the exclusion and rejection of those who are different from us in color and in culture is nothing less than sin.

Now, I am a life-long United Methodist and one thing I have learned about our church is that we have a hard time with sin. We seem to think that we can reason our way out of every sinful hole. We see sin in others but we can’t seem to see it in ourselves much less repent for it. But acknowledging our sin, being repentant for our sin, and asking for God’s forgiveness is the only way forward. We will not be saved by the restructuring of the church, or by fighting for the preservation of an agency, or by our pride in the tiniest signs of being an inclusive church.

How many people of color does The United Methodist Church have today? Well in the U.S. if we all lived together in the same city, it would be said that our city was a White town, because we people of color would be such a small almost invisible group in such a city.

How long? How long have we said that we are committed to being a reflection of God’s created human diversity? How long?

We are fortunate that God is a patient God. I am convinced that God allowed us to wallow in our sin and even experience the very possibility of losing this agency called GCORR because of our collective sin until we could again be agents of God’s good work.

Those of you who have served on GCORR over the last 8 years know that it has taken a lot of house cleaning and heart clearing to get back to God’s good work. We have seen the fruits of our renewed commitment and our hard labor particularly in these last four years. Our Ministry Model of:

… has brought renewed vitality to our work and to our spirits, and I would say that it has helped us to help the church to go further and deeper in its work of overcoming racism, even as we begin to consider tribalism and other expressions of racial and cultural discrimination in our world-wide church. Much effort and prophetic leadership has gotten us back on track.

But let’s not get too comfortable or become smug. Let’s not sin again by assuming that we are the healing source, the saving grace, the liberating force in the work we have been about. If truth be told, we are, as the Israelites in exile in Babylon discovered, but mere grass, flowers in the field. And with our ancestors in the faith we know that the grass withers and the flower fades because the breath of the Lord blows upon it. We are just like the grass and the flower — here for a season, but then we wither and fade and blow away.

Can’t you feel it? Particularly those of us who end our term of service on the GCORR Board. Our day is coming to an end. In just a few months people won’t remember that we ever served on this board or that we had a part in the work that’s been done. Our pictures will come down from the GCORR web page and other’s fresh faces will replace our faces.

Yet isn’t this how it should be? After all, whatever we have been able to accomplish has been accomplished not by our own efforts and merits but because we serve a gracious and merciful God. God who generation to generation extends God’s own salvation to us and allows us to know the goodness of God’s heart, the power of God’s Spirit, and the dream of God’s longing.

One day we WILL be one with each other, persons of every color and culture, race and place, but not by our own doing. We are not good enough. One day soon we will be the beloved community by God’s grace and God’s grace alone!

It is God who lifts us up out of our sin and carries us into God’s own circle of love and mercy, peace and justice; into the beloved community where All are included. Can we see it?

The prophet Isaiah describes it as the incredible sight of God our good shepherd claiming us, all of us, as God’s own flock, feeding us, gathering us in and carrying us in God’s bosom, and gently leading us as those who are pregnant with life and hope. God the everlasting One, the Creator of all that is, will not faint or grow weary in his care for us. God gives power to the weak, and strength to the powerless; power and strength to the trampled, the excluded and the forgotten. As we wait upon our Lord, our Lord will renew our strength and help us mount up with wings like eagles, we shall run and not be weary, we shall walk and not faint. It is God’s faithfulness that has brought us thus far!

A few weeks ago I was on a plane coming home from a gathering of our College of Bishops and others. I was dead tired, so weary I wondered if I could even make it home. I found a window seat, sat down and began to sink in. Then a little girl no more than 9 or 10 years old found her way to the seat directly in front of me and plopping herself down in that seat began to excitedly talk away to her mother. “So much for my nap,” I thought. But then I began to get pulled in by this child’s joy. She was excited about her trip.

She thought the day was perfect, the plane was just great, she could hardly wait for the peanuts and Coke she was going to get! And then her joy which seemed to be boundless just soared! She looked out the window and noticing that her seat was lined up perfectly with the plane’s wing declared with sheer delight, “Look Mommy, I’m gonna be flying on the wing!”

Friends, that little girl was right! This is a perfect day! It is God’s own day for us! Isn’t it great and awesome and wonderful that on this very day we are being carried in the arms of our loving God who pardons our sin and reclaims us as God’s own? Don’t we know that as we travel forth on our journey of life in faithfulness we will be fed and our thirst will be quenched by our gracious Lord who will satisfy our every need? And, have we not known that we always, always, fly on the wings of God’s faithfulness.
Of all this we are assured!

Thanks be to God!